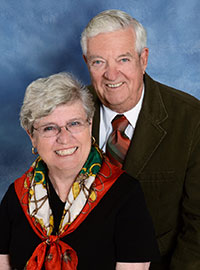 Judy is a multi-talented woman; a licensed pilot, and author, who is a pleasure to meet. Judy was born in up-state New York, and lived in Canajoharie in the Mohawk Valley area. She was an only child and the family later moved to Kissimmee, and then to Melbourne in time for her to enter sixth grade. She later graduated from Melbourne High School. Her parents divorced when she was a teen.

She and her mother were like very close sisters, and enjoyed the area’s beaches. One day while at the beach they met a young weatherman named Roger Winn, who stationed at Patrick air base. Both liked this young man and Judy and Roger were married when she was eighteen and they recently celebrated 58 years of marriage. 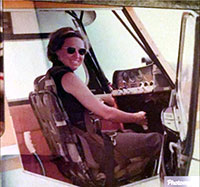 Roger was a typhoon chaser and they lived in Guam and Japan.  While living in Japan she received an unexpected birth notice from her father that she had a half-sister and a few months later she was able to send a birth notice to him announcing the birth of the Winn’s son. The couple had a son and daughter who were both born in Japan.

Ten years after high school she went to Wright State University in Dayton, Ohio, and earned a B. A. Degree in Political Science, with a minor in Economics. While there she was able to fulfill a dream and earned a private and commercial license, with instrument rating in single engine aircraft. Judy enjoyed her career as a civilian for the Department of Defense, primarily Air Force, in different positions in civilian personnel management before retirement. 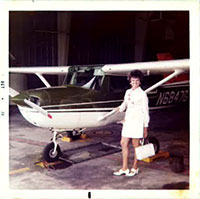 One time while attending a Dayton air show and because she still she had her professional license she was able to fly a Ford tri-motored plane.  She said, “It was the highlight of my pilot days and being a member of the 99ers.”

Both of their adult children now live in Luxemburg and they have three grandchildren. Their adult children and grand-children are multi-linguist. Their daughter is a successful artist, and radio personality and works for the European Commission, and their son is an outstanding news-cameraman who is constantly traveling the world on assignment. Their granddaughter just started college in North Carolina and living in the U. S. for the first time.

Years after receiving the birth announcement she was able to contact thru ancestry.com, her half-sister who was living in Florida and a wonderful longstanding relationship has developed. Both families enjoy each other’s company.  Judy and her husband discovered IRCC while attending a High School reunion held at the Colony Club, hosted by her class-mate Nancy Fletcher.

The Winn’s moved to IRCC five years ago and enjoy the people that live and work here, and they particularly like the security and walking paths. Roger has had recent health issues and with help from therapy and his own determination he is progressing nicely.

Judy is involved with yoga, sewing and writing. She is presently the Continental Street reporter and in 2013 had her romantic suspense novel “The Silver Seahorse” published by a Canadian publisher. It is available at Amazon and others as an e-book. When time permits, the couple enjoy walking in our many walking paths, and Judy has plans for writing another book.