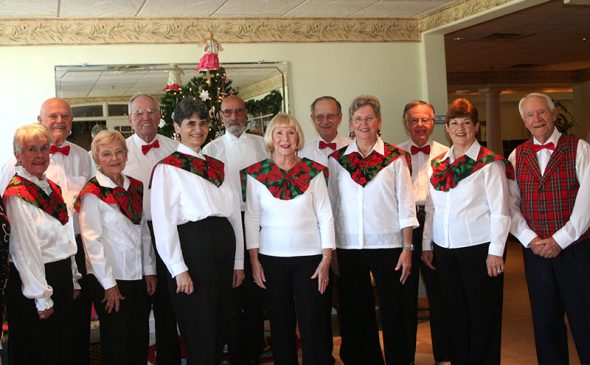 The Colony Singers continues to be IRCC’s “Musical Ambassadors” with important and prestigious engagements both on and off the campus.

Early last month, they performed for a large crowd at the Eau Gallie Yacht Club at the special invitation of the Brevard Symphony Society.  Having been booked for this performance for almost a year, they were most appreciative of a program of music from “The Great American Songbook.”

They have become the perennial favorite of the Goldrush residents and they count on the Singers to perform at virtually all of their functions.

In November they opened the program and set the stage for the most important ceremony honoring our dear friend and national hero, Tom Jones. Colonel Jones was awarded the “The Congressional Gold Medal” by a member of Congress and it was truly an emotional and inspirational moment for all of us in the IRCC community.

Over the past decade the Colony Singers have become one of the most popular performing groups at IRCC, and is by far the most active performing organization with its many concerts throughout the year.  The Colony Singers performed often with large bands and orchestras and is widely noted for the special arrangements written just for the group that have become the hallmark of its unique and enduring sound.