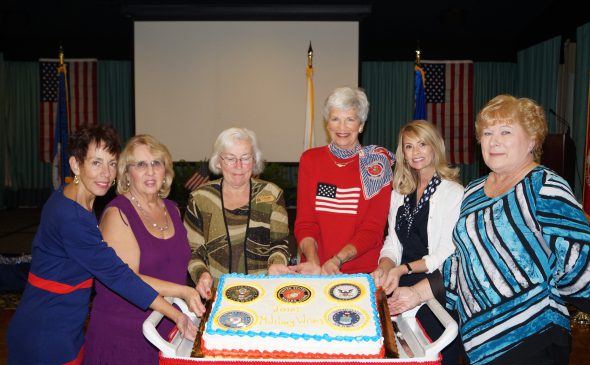 (VIERA, FL) February 12, 2018 – Military wives are spirited and resilient by nature. They have left family behind to move halfway around the world, put careers on hold, made new friends over and over and mastered the art of self-sufficiency. On January 26 at Indian River Colony Club in Viera, the military wives clubs of five different service branches came together in celebration during the First Annual Joint Military Wives Luncheon. 180 women from the 55+ neighborhood on Murrell Road and Viera Boulevard stood at attention as an Honor Guard of active duty personnel carried their service flags and a VFW Color Guard from Rocket Post 4534 presented the colors. The Indian River Colony Club Chorus led those assembled in the singing of the national anthem as well as the service songs for the U.S. Army, Navy, Air Force, Marines and Coast Guard. Guest speakers from the Brevard Veterans Memorial Center and the Florida Department of Veterans Affairs delivered remarks to the military wives and the Brevard Police and Fire Pipes and Drums provided Highlander-style entertainment, with the playing of traditional bagpipe music. The afternoon event concluded with the singing of “God Bless the USA” and “Taps.”

Viera’s very first neighborhood, Indian River Colony Club was originally conceived as a retirement destination for military officers. IRCC began to take shape in 1986, its vision to create a private country club-like environment for members. Membership at “The Place Patriots Call Home” has now expanded to include up to twenty percent non-military personnel over the age of 21 who want the energetic lifestyle cultivated by three decades of members. Still predominantly a haven for military retirees, IRCC maintains a patriotic culture centered on service to others.

100% debt-free IRCC is a gated golf course community of nearly 800 homes on 453 acres in Viera, owned entirely by its membership. The community enjoys 24-hour gated security, a generous maintenance package and a full complement of newly renovated country club amenities for active adults aged 55 and over, including an 18-hole, par-72 private golf course.