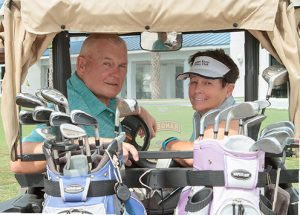 Some years ago, Mike and Sue Barney volunteered to help the IRCC Chapel Foundation Food Drive by collecting food and taking it to Daily Bread or
the South Brevard Sharing Center. Mike and his wife Susan moved to IRCC six years ago and like to travel, play golf, read and exercise. They recently spent some time relaxing in Ft. Walton Beach and just returned from a cruise.
Mike is on the Policy & Plans Committee, is Vice President of the West Point Society of the Space Coast, and a former president of the IRCC 200 Club. He spent 27 years in the Army and another 20 years in Financial Services at a large community bank in NH.
But after Mike became a “collector” in this outreach activity, the IRCC Chapel Foundation Food Drive, he realized there was more involved. After
a year or two, Mike took over the helm of the food collection project from Dick Lovisone.
Now he says, the biggest challenge is making sure he has lined up enough collectors for the upcoming year. Ideally, he said, an individual or a couple
might sign up to collect one month out of the year. That involves going to the collection sites throughout the month, picking up the food and taking it to the two sharing centers we support.
He has an organizational meeting once a year to get things set up for the upcoming year. He’s been thinking, though about trying to encourage some new ways for IRCC residents to donate.
For example, block parties could collect food or we could have a community wide collection. His focus has been to try to get the wider IRCC community involved in supporting this effort.
It’s no small matter – last year, IRCC donated more than eight tons of food. Food donations have been up about a third over the past couple of years, but Mike is working on increasing that even
more. He said he believes the statistic is about one third of kids in Brevard County are at poverty level or below.