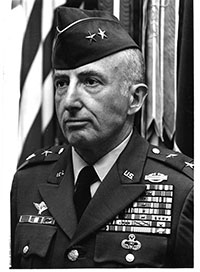 (VIERA, FL) June 8, 2018 – One of the military heroes of Indian River Colony Club in Viera was posthumously honored at the May 22 meeting of the Brevard County Board of County Commissioners, with a Resolution naming the soon-to-be constructed bridge over the Florida East Coast railroad on the Pineda Causeway as the Major General John Cleland Memorial Bridge. General Cleland passed away in 2017 at the age of 92 and was a resident of Indian River Colony Club since 2001. Major General John R. D. Cleland retired from the United States Army in 1980, after thirty-seven years of active service. He was a Master Parachutist and was awarded the Combat Infantry Badge in three wars. His decorations include the Distinguished Service Medal with oak leaf cluster, the Silver Star Medal, the Defense Superior Service Medal, the Legion of Merit with three oak leaf clusters and the Purple Heart Medal with oak leaf cluster. General Cleland was a member of the US Army Infantry Hall of Fame and served as the Honorary Colonel of his Korean War Regiment. His widow, Clara Cleland still resides in the 55+ neighborhood of predominantly military retirees. In part, the Resolution reads: “The Board of County Commissioners and a grateful community would like to honor and recognize him in perpetuity for his lifetime of service to our county and our country. NOW, THEREFORE, BE IT RESOLVED THAT THE BOARD OF COUNTY COMMISSIONERS OF BREVARD COUNTY, FLORIDA, does hereby name the soon-to-be-constructed bridge over the FEC railroad on Pineda Causeway the “Major General John Cleland Memorial Bridge” Let this serve as a reminder to all of the life of this great public servant.” Viera’s Indian River Colony Club is known as “The Place Patriots Call Home.” 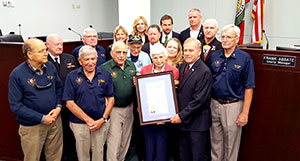 District 4 Commissioner, Curt Smith proposed the resolution to the Board of County Commissioners. Both IRCC and the location of the flyover bridge are in District 4. But it was Melbourne City Council Member and Army veteran, Tim Thomas, who initially urged Smith to honor General Cleland.

“When I started the Army JROTC program at Viera High School, General Cleland contacted me and immediately became a supporter of our young program,” said Thomas. “Our Cadets were just in awe of General Cleland and his military accomplishments in World War II, Korea and Vietnam. Once he passed, I felt strongly that because of his distinguished service to our country and community, we needed to do something to honor him.”

Construction of the flyover bridge west of U.S. Hwy 1 is expected to take 18 months, after which a memorial plaque will be installed. The long-planned flyover bridge will allow cars to traverse the Pineda Causeway without stopping for trains. The Pineda Causeway connects the barrier island to the north Melbourne mainland and is a designated hurricane evacuation route.