IRCC Resident, John Snyder – The Second Amendment to the Constitution 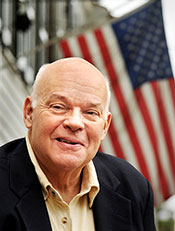 John Snyder, credited by the Washington Post and the NY Times as “THE DEAN OF GUN LOBBYISTS” treated members of the The Military Society of the Blue Badge and their guests to an outstanding presentation regarding the US Constitution and the Second Amendment (The Right To Keep and Bear Arms), at the April 28th monthly meeting. Mr. Snyder, an IRCC resident, is a 50 year veteran of the DC Bureaucracy, who has waged a continuing political battle over the importance of this amendment and the need for its retention in today’s society.  John and the topic were so well received that he will once again be the featured speaker at a Blue Badge meeting early in 2018.

Below is an introduction to John Snyder and some of his life accomplishments.

For 50 years, John Snyder has defended American gun rights. He has been an NRA editor, Director of the Citizens Committee for the Right to Keep and Bear Arms and Trustee of the Second Amendment Foundation. John is founder/director of www. Gun Rights Policies.org and founder/chairman of the St. Gabriel Possenti Society. John and his wife, Ling are founders and managers of Telum Associates, LL.C, which among other things published his book, Gun Saint. 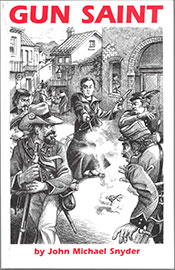 Gun Saint is about St. Gabriel Possenti and the St. Gabriel Possenti Society, Inc., of which John is the founder and Chairman.  In 1860, St. Gabriel Possenti rescued the villagers of Isola del Gran Sasso, Italy from a gang of 20 terrorists. With a one-shot demonstration of handgun precision, he shot a lizard that happened to be running across the road. The terrorists were so impressed by Possenti’s marksmanship, they did not challenge him when he marched them out of town. St. Gabriel Possenti then became known as the savior of Isola. He died two years later of consumption and in 1920 Pope Benedict XV canonized him.

John Snyder and his wife, Ling, purchased their IRCC home at 1452 Patriot Drive in August 2016. They tremendously enjoy and look forward to the various social activities with their fantastic neighbors. John especially likes the IRCC Rifle and Pistol Club.

John Snyder currently serves on the boards of the National Association of Chiefs of Police, Council for America and the American Federation of Police and Concerned Citizens. John received his AB and MA from Georgetown University. 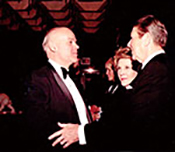