IRCC turns 31 and is congratulated for patriotism, community service

(VIERA, FL) March 10, 2017 – A group of seniors at a Brevard County Commission meeting is nothing new. But the well-dressed group from Indian River Colony Club in Viera weren’t there on Tuesday, March 7 to weigh in on a political matter. Rather they were there to represent the 1300 residents of the Viera 55+ neighborhood on Murrell Road and Viera Boulevard and to receive a special proclamation from the Brevard County Commission. Shortly after the meeting began, District 4 Commissioner Curt Smith acknowledged the assembly and read aloud the official government document:

• RESOLUTION Whereas, the Indian River Colony Club (IRCC) was the first residential community to be built in the vast land area owned by the Duda Family; and, Whereas, the developers of IRCC had the goal of creating a community where military officers and their families could afford to enjoy the rest of their days in comfort and relaxation; and, Whereas, IRCC now consists of a sizeable community of military officers and others who have served in many of our Nation’s wars and reflect the highest possible standards of patriotism and dedication to Country; and, Whereas, the residents of IRCC are a group strong in community spirit and are volunteers that can be found in Brevard hospitals, veterans’ facilities, soup kitchens, and wherever support is needed to help their neighbors; and, Whereas, IRCC maintains and supports its own officially established Foundation that provides essential financial and educational assistance to those who need a helping hand; and, Whereas, IRCC has grown over the years to become a community of 771 homes and over 1300 outstanding citizens who in every way contribute to the viability of Brevard County.NOW THEREFORE BE IT RESOLVED THAT THE BOARD OF COUNTY COMMISSIONERS OF BREVARD COUNTY, FLORIDA, does hereby recognize the 31st Anniversary of the Indian River Colony Club and proclaim February 4, 2017 as IRCC DAY In Brevard County and offers their congratulations and sincere appreciation for the outstanding asset you, the members of IRCC, have brought to Brevard County. Done, Ordered, and Adopted, in regular session, this 7th day of March, 2017.

Behind the walls on Murrell Road and Viera Boulevard, Viera’s very first neighborhood just marked its 31st anniversary. Conceived as a retirement destination for military officers, Indian River Colony Club began to take shape in 1986, its vision to create a private country club-like environment for members. Today, 100% debt-free IRCC is a gated golf course community of nearly 800 homes on 453 acres in Viera, owned entirely by its membership. The community enjoys 24-hour gated security, a generous maintenance package and a full complement of newly renovated country club amenities for active adults aged 55 and over, including an 18-hole, par-72 private golf course. Membership at “The Place Patriots Call Home” has now expanded to include up to twenty percent non-military personnel over the age of 21 who want the energetic lifestyle cultivated by three decades of members. Still predominantly a haven for military retirees, IRCC maintains a patriotic culture centered on service to others. For more information about Indian River Colony Club, call 321-255-6000 or visit their website at www.IndianRiverColonyClub.com.

Bill Corbett reflects on what the public recognition means to the residents of IRCC.

“‘The Place Patriots Call Home’ is how we describe our close-knit community,” said Corbett. “Many of our residents served our country with honor and continue to live their lives with patriotism and compassion for others. We are gratified that our County Commission recognizes the contributions that we have made as individuals and as a force for good in Brevard.” 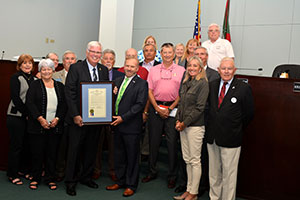