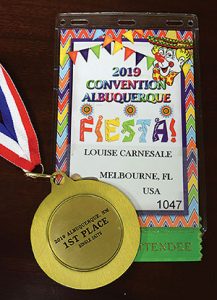 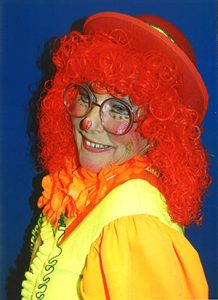 (VIERA, FL) May 14, 2019 – For Louise (LuLU) Carnesale of Viera, clowning is more than just wearing a red nose.  The retiree and mother of 14, whose mission is to bring smiles to those who need it most, recently took top honors in the Single Skit Competition at the 37th Annual World Clown Association Convention in Albuquerque, New Mexico. The convention was held March 3-7 and attracted several hundred clowns and spectators from around the globe. Louise, a member of the Colony Clowns from Indian River Colony Club and a first-time attendee, won 1st place from among the numerous professional and international clowns at the convention– including an entry from Cirque du Soleil. Mrs. Carnesale has been active as an amateur clown since 2014; “LuLU” is her officially registered clown name. The winning skit, entitled “Heavens Under Construction,” encouraged people to become believers in something beyond themselves.

After moving to Florida and Indian River Colony Club in Viera in 2014, Carnesale reignited a love of clowning and assumed a leadership role in developing a new group of 16 Colony Clowns.

“Bringing smiles to seniors, children in daycare or hospitals, Alzheimer’s patients in assisted living facilities– also brings a smile to me,” said LuLU. “Clowning is more than a red nose and the personal rewards have been many.”

In the 1990’s, Carnesale attended a New York community college which offered clown training. Shortly after, she joined a Clown Alley and volunteered part time at local hospitals and a facility that cared for children with AIDS, which she continued until her retirement from New York State.

A resident of Indian River Colony Club for six years, Louise Carnesale spent eight years in the US Air Force, and is married to an Army veteran with a career of 36 years.