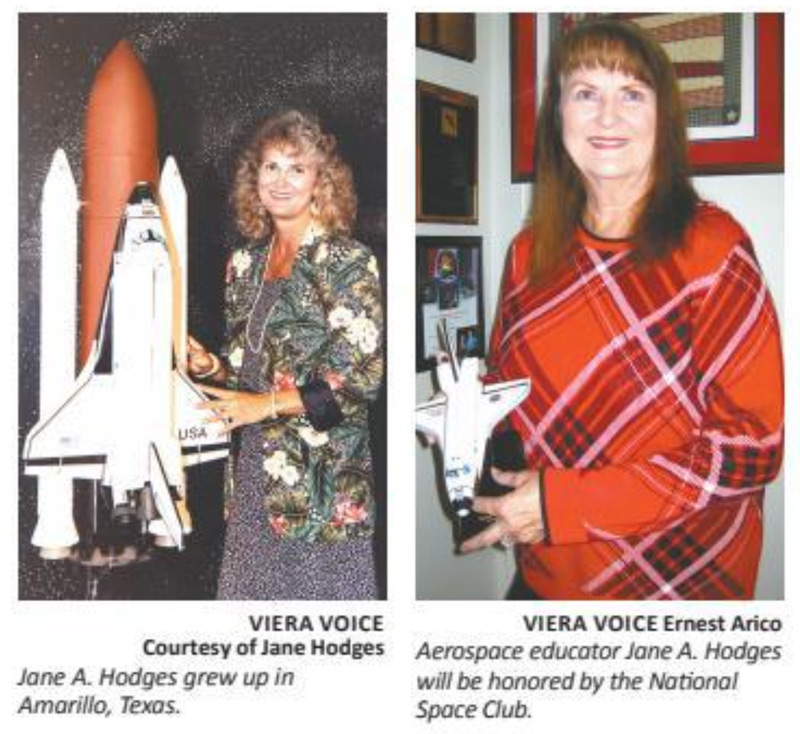 Hodges, a resident of Indian River Colony Club since August 2020 with her husband Dave Hutton, will be recognized for her 50-year aerospace education career at the committee’s Dec. 10 banquet at the Radisson Resort at the Port Convention Center.

“I’m very humbled by the award,” Hodges said. “This is a great retirement gift to me.”

Born in Amarillo, Texas in 1948, Hodges earned seven degrees (including two doctorates and a law degree from Emory University in Atlanta), wrote materials on air and space science; created and taught courses on aerospace education at three different colleges and universities and in West Africa; directed aerospace education for the Civil Air Patrol; served in NASA’s public affairs department at Kennedy Space Center; traveled to more than 80 countries as a presenter/speaker at international conferences, and established Edisto Press, her own international aerospace consultation and publication business.

“I was definitely a pioneer in the field of aerospace education,” Hodges explained. “My job was to integrate aerospace technology into the K-through-12 curriculum.”

Hodges said she was always well-received wherever she went to talk about space, especially when she brought her inflatable space shuttle.

“Aerospace is an international language,” she said. “Everyone was interested in space. I got the kids excited about space.”

Jim Jennings, the former KSC deputy director from 1998 to 2002, nominated Hodges because of her lifetime dedication toward aerospace education and NASA.

“She did a lot of work to get students interested in space,” said Jennings, now the president of Omega Plus, a consulting firm that helps businesses work with NASA. “She did so much work behind-the-scenes to make us look good at NASA.”

Headquartered on the Space Coast, the National Space Club of Florida Committee (NSCFL) is a nonprofit corporation composed of individuals representing industry, government, the Department of Defense, regional educational institutions and the public. These individuals share the same mission — increase public awareness of America’s aerospace programs.

Since 1992, the committee has recognized one to three people for life-long achievement and contributions to the U.S. space program while living in Florida. Past honorees represent a wide range of managers, engineers and other specialists who were vital to the success of the efforts in space.

Hodges is the first woman ever to receive the award.

“It was always a good ole’ boys network at NASA,” Hodges said. “There were many male-dominated jobs. But now you’re seeing a lot more women being recognized for their work in the space industry.”

Hugh Harris, the former KSC director of public affairs, and Hodges’ supervisor when she worked in the education department, recalls that Hodges was tremendously enthusiastic about her role.

“She helped teachers from all over the country learn more about the space industry,” Harris said. “She was particularly effective in encouraging women, as well as men, to go into the various fields at NASA.”

According to the NSCFL’s website, the nominee must have made significant contributions to the space industry through technical achievement, education or the management of aerospace related activities as a government, military, commercial or government contractor employee.

“I’m very pleased that she is getting the award,” Harris said. “Many women deserve to be recognized for their work at NASA and in the space industry.”