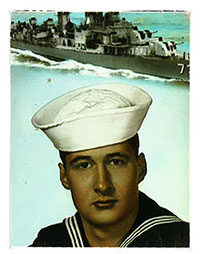 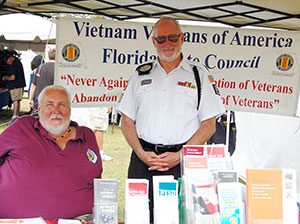 efore Jim Rufino became one of the approximately 450 Vietnam veterans who live at IRCC, he recognized there was a need for those veterans to be recognized and to have the opportunity to communicate with each other.

Jim, a Navy veteran who was one of the more than nine million military personnel who served on active duty from August, 1964 to May 1975 during the Vietnam Era, began his involvement when he and wife Kathleen lived in South Florida.

He found himself stepping up while a member of the Vietnam Veterans of America in Boca Raton some 20 years ago.  The Rufinos moved to Brevard County in 2001.  Since then, he served as President of the Brevard Chapter for four years and as state coalition representative to the Florida State Council for more than 6 years.  He also has served on US Congressman Bill Posey’s veterans’ council.

He has been active for many years in the annual Florida Vietnam and All Veterans Reunion run by the Vietnam Veterans of Brevard.

The Vietnam traveling Memorial Wall will be on display May 5-12 at the park.  The Wall Escort – hundreds of motorcycles – most of them driven by veterans — will leave at 10am May 5 from Eastern Florida State College Cocoa Campus and travel to Wickham Park.

With the coming of this special event, which brings together all branches of the armed forces for a week of gratitude, recognition, reflection and camaraderie, Jim thinks of the many Vietnam Era veterans who live in IRCC.  He’d like to be in touch with them, and even to organize some sort of get-together, but the sheer number of veterans of that era who live in IRCC makes planning such an event a challenge.

The fact that Vietnam Era veterans are aging – the youngest Vietnam era veterans are approximated to be 68 years old – weighs on him, and he feels the urgency of having something done here for the men and women who served.

At least, he hopes, those veterans will take advantage of the live music, food and drinks, vendors and displays at the reunion next week.  Last year, IRCC had a tent set up at the reunion.